That Merry Clayton is in Maid to Order AND SINGS IN IT should be reason enough to check it out. Some 17 years after she belted out “It’s just a shot away!” from the depths of her soul with Mick Jagger in Gimme Shelter, she showed up in a movie starring Ally Sheedy where she sang an Ashford and Simpson-penned song while playing a maid. The mind reels.

And while we’re at it, let’s just take a moment to revisit that Ashford and Simpson penned a song sung by Merry Clayton in a movie starring Ally Sheedy playing a spoiled rich playgirl who eventually becomes a maid. These are Songwriters Hall of Fame icons who wrote such hits as Ain’t No Mountain High Enough, You’re All I Need to Get By, and Chaka Khan’s I’m Every Woman. For the movie Maid to Order, they wrote a fantastic little tune called I Can Still Shine. Merry Clayton sings it. Goosebumps abound. 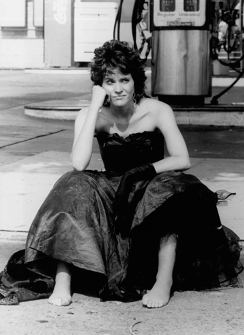 From the outside looking in, Maid to Order might not look like much more than an entry in the catalog of “Superficial but Fun Feel-Good 80’s Flicks.” And there is absolutely merit in including it in that catalog. But there’s something else. It has a little “something.”  At the very least, that Something boils down to the telling of a sweet story with a message. At the very most, viewers are treated to a nicely-crafted film imbued with humor and heart, featuring a stellar supporting cast.

The story is just SO very 80s. Ally Sheedy’s Jessie is a mess. She’s a rich kid living in Beverly Hills (maybe Malibu?), partying too hard in her red Mercedes convertible, and being a jerk to everyone. Her dad is played by Tom Skerritt, a hard-working Business Man who just can’t seem to get Jessie to change her ways. One fateful wish placed by Dad in a moment of disappointed frustration, and Jessie finds herself with a chain-smoking but stylish fairy godmother played by Beverly D’Angelo, no money, and no job.

Jessie finds work as a maid for Georgette and Stan Starkey, millionaire record producers and two of the most hilariously horrible humans set to screen. Played with delicious satirical excess by Valerie Perrine and Dick Shawn, there are multiple scenes where they absolutely steal the spotlight. I get the impression that these character were written with two very specific people in mind. They’re awful in a multitude of ways and I have thought of them often with a chuckle over the years.

Maid to Order is written and directed by Amy Holden Jones, whose other writing credits include such gems as Mystic Pizza, Indecent Proposal, and Beethoven. She currently works creating and writing shows for television, where I wonder if she still runs into the Georgette and Stan Starkeys of the world. My guess would be yes. I’d love to pick her brain about this some day.

And so, if you have arrived at the end of my plea to give this fun little 80s flick a chance and find yourself wanting more, two suggestions have I: