I really love Tim Burton. And, as a child, I doubt that I was cognizant enough of such matters to connect that all of these movies that I loved and was religiously rewatching were made by the same director. I connected those dots later, probably sometime after seeing and falling irrevocably in love with The Nightmare Before Christmas (which Burton did not direct, but created and produced). But I was in high school then and actually cared by that point about what movies were made by certain directors and what movies by directors whose work I enjoyed I was still yet to see.

In 1994, Tim Burton made a film called Ed Wood that was nothing at all like anything else he had ever done before. It had the director’s trademark whimsy, sure, but it was lacking in the director’s trademark vision. Even as amusing as it is, this is a film that the director obviously intended for a viewer to take seriously. Filmed entirely in black and white, Ed Wood was a bio-pic of a real person, a film director who, more than likely, was of considerable inspiration to Tim Burton. Ed Wood, the real one, was an independent filmmaker in the 1950’s whose work is marked for all time as evidence that the filmmaker didn’t have a lick of talent for the art of filmmaking. His most famous film, an almost-unwatchable 78 minutes of D-grade schlock called Plan 9 From Outer Space, tops many internet lists as possibly being the worst film ever made. Anyone with this movie on their list has a position easy to defend.

But hold on . . . this article is not about Plan 9 From Outer Space. It’s not even about Ed Wood. It’s about the movie Tim Burton released after doing Ed Wood. It’s called Mars Attacks! and it’s awful. One has to wonder why Tim Burton would follow up (probably) his best movie with a ridiculous dumpster fire of a movie that, forty years prior, would only have been made by . . . Ed Wood.

Released in 1996, Mars Attacks! is a not-very-funny comedy about an invasion of Earth by hyper-intelligent beings from Mars. When the Martians arrive on Earth, they confuse a dove, released at the meet-and-greet by a hippie, as a sign of Earth’s hostility and all hell breaks loose. The President of France is assassinated by alien invaders. Congress is destroyed . Millions of people are decimated. People are kidnapped by vicious aliens, dismembered, and left to survive as disembodied sentient heads in jars. Jack Nicholson plays two roles (including the most ineffectual world leader possibly ever depicted on film). Vegas lounge singer Tom Jones is instrumental in the future of humanity. Slim Whitman’s song “Indian Love Call” is used as a weapon of mass destruction. It’s all pretty terrible.

And I loved every second of it. 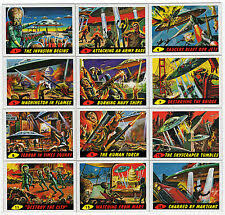 Let’s back up a second . . . I have to explain that I had an interest in this movie beyond my love for the director. Mars Attacks! is based on a set of trading cards. That’s right. Trading cards. From a company called Topps, which most people would recognize as a company that makes and distributes baseball cards. The original cards were very innovative for their use of using individual cards to tell a single story, with each card serving as one panel of an ongoing comic book. Collect all the cards and you’ve collected the entire story.

The original cards told a ground-breaking science-fiction saga about Martians discovering that Mars is about to explode due to internal pressure in the planet’s core. They invade Earth in attempt to colonize and move their civilization. The cards were petty graphic, depicting futuristic battle scenes, recognizable Earth landmarks being decimated, and bizarre methods of human torture and slaughter. The original cards were drawn by artists Wally Wood and Norman Saunders.

Let’s back up again . . . I’ve been a comic book collector for most of my life. My favorite comic book among all of the ones I’ve read and enjoyed over the years is a Marvel comic called Daredevil. I’m sure you’re familiar with Daredevil, if not from the recent stellar Netflix series, from the less-than-good 2003 movie starring Ben Affleck and Jennifer Garner. Marvel first started printing Daredevil in 1964. When it started, Daredevil looked like this:

The comic struggled in sales for the first several months and was near cancellation until issue 7 when Daredevil started to look like this: 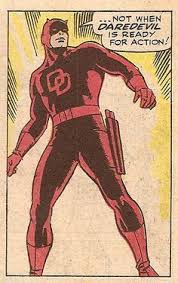 New design, new character concept, and the book began to sell again. The artist responsible for this character design, and perhaps the revitalization of a comic book that has now existed for fifty-five years, was very popular at the time. That artist was none other than . . . Wally Wood.

Okay. We’re essentially caught up. I’m a fan of Wally Wood (who is also well-known for his work in Mad Magazine). I’m a fan of the trading cards. I’m a fan of Tim Burton. This movie was high up on my list of movies I needed to see in 1996.

I saw it on opening night, and left the movie theater pondering why I was contemplating going back to see a movie that I didn’t find very funny and kinda bored me. I thought to myself that maybe I just didn’t get it. But what’s there to get? The movie is broadly-acted. The special effects (with a few exceptions) are not very good. An excellent all-star cast (including Pierce Brosnan, Glenn Close, Annette Bening, Natalie Portman, Michael J. Fox, Martin Short, and Danny Devito) is pretty much wasted with little screen time or nothing of note to do. The plot is incomprehensible. The violence is cartoonish and senseless. The laughs are juvenile and not very funny. There didn’t seem to be much here to get. This is clearly not a very good movie. Why oh why, do I want to go see this piece of trash again?

Mars Attacks! isn’t supposed to be any good. It was never intended to be any good. It was intended to be schlock late-night drive-in movie garbage. It was intended, in short, to be an homage to the director that inspired Tim Burton enough to make the well-received film that pretty much put him on the map in the first place. Burton was popular before Ed Wood, to be sure. But he wasn’t horribly credible. Not really taken seriously. Not really seen as a director that should be taken seriously. Certainly not an Oscar winner. Ed Wood gave movie snobs that would never deign to recommend Beetlejuice (if they ever even watched it in the first place) a reason to take notice of his work, of his visionary approach to storytelling. It gave them reason to excitedly wonder what this weird, gothic little man might be up to next. The joke’s on them because what he was up to next was Mars Attacks!

If you accept Mars Attacks! as an homage to Ed Wood, then it really works. It’s not even an homage so much as it is an imitation. For this reason, it might just be the most brilliant film in the entire Tim Burton canon.

I really do have a soft spot for Tim Burton. He’s only made one movie that I haven’t watched repeatedly (2001’s Planet of the Apes was a pointless and idiotic remake of a movie that I hold very dear to my heart). And I agree that not all of his movies are good (not a tremendous fan of either Charlie and the Chocolate Factory or Alice in Wonderland either– but I blame Depp for that more than I do Burton). Mars Attacks!, as I’ve stated, is also not very good. But it’s heart is in the right place.

Ed Wood would have loved it. And I think that’s the point.