That was my list. My list of “Top 5 Single Moments in Any Movie Ever.” All iconic. All easily recognizable. All perfect representations of why I love those particular films in the first place. A lot of thought went into that list. It wasn’t an easy list to create.

But . . . on the afternoon of Saturday, April 27, 2019, I discovered another “moment”. And now I have to decide which of the five moments I just mentioned no longer holds a place on the list. Because this newly-discovered moment trumps everything else that I’ve already added. This moment, I gotta tell you, is a moment that I have been waiting to see for pretty much my entire life.

This is the point where I feel obligated to provide two warnings: a) I will be, from this sentence forward, discussing and spoiling plot points from The Avengers: Endgame. If you have not seen the movie yet, you may want to STOP READING NOW! b) I’m about to come across as the geekiest geeky geek that ever did geeky geek. I would apologize for that if there was anything that I could possibly do to help it. But my statement above– you know, the one about “waiting to see this moment for pretty much my entire life”?– is not hyperbolic in any way. It is, quite literally, the truth.

I have been an avid reader and collector of comic books for almost my entire life. It started right around kindergarten with The Fantastic Four, a comic that was also read and enjoyed by my grandfather, a man I greatly admired. He had stacks of these comic books in a cardboard box next to a chair on a back porch that no one ever seemed to use. Then, it was The Amazing Spider-Man, a comic book mainstream enough that it was available at local libraries. And then . . . I was introduced to Captain America. A dear friend of mine had an obsession with Captain America comics because his father, who had served in the military, and his grandfather, who had seen combat in the Korean War, were both fans of the character. As opposed to my grandfather, who had a stack of about fifty assorted issues of Fantastic Four, my friend’s father and grandfather were collectors. They had almost every issue. They had been collecting them for years. For decades, even. They were in ratty condition from years of mishandling and abuse, but they had them. I must have read every single issue fifty times.

Jump ahead to middle school. I’m purchasing my own comics with my own allowance, so funds are tight. I can only afford to regularly buy maybe two titles a month. I get Fantastic Four and Daredevil. Another friend gets Amazing Spider-Man and The Punisher. A third friend gets The Avengers and X-Men. A fourth gets Captain America and The Incredible Hulk. You get the idea. We shared the comics amongst the group, I allowed them to read my comics in exchange for their comics, etcetera etcetera. We were able to keep up on story elements and new character introductions without having to purchase the comics ourselves. To wit: I wasn’t buying Captain America any longer, but I was still obsessed and still following the character religiously.

Jump ahead to adulthood. I still collect comics. Correction: I collect one comic. But technology being what it is, with advancements being what they are, I can still read all of the comics I used to read. The only difference is that I do it digitally on my laptop or smartphone. I currently have a digital collection that contains more comics than I can ever read in my lifetime. Don’t judge me.

At any rate . . . the point, right? I’m getting to it. All of this seemingly-endless backstory just to make clear that I love Captain America. And have since I was wee. It is not too far of a stretch to say that I learned to read in the first place with Captain America comics. It is a fiction character for which I harbor a love that is very, very real.

The afternoon of Saturday, April 27, 2019, I head to the theater to see Endgame. I post something on Facebook about how the movie starts in ten minutes. I make some snarky remark about needing a ride home if they kill Captain America because I will be too inconsolable to drive. I have my ginger ale, my popcorn. The trailers are beginning. A few minutes in, it occurs to me that I may have not turned off the ringer on my phone. I double check to make sure and see that I  have just received a text from Karen that says “message me when you get out!” Knowing that she had seen the movie the night before, I immediately know, deep in my heart, that Steve Rogers is going to die in this movie. Karen just wants to be the first say “I’m sorry for your loss”, knowing what this character means to me. Right?

As it turns out, Captain America does not die in this movie.

As opposed to Black Widow, who dies after a fight with Hawkeye over which one gets the right to sacrifice themselves. Or Tony Stark, who was the beginning of this franchise and has become its emotional core. But those two deaths didn’t make me cry. I was already crying by the time Tony Stark bites the dust, and I had been for about a half hour.

What made me start crying? Two words. Uttered by Captain America. “Avengers . . . assemble!” I started bawling. And that wasn’t even the part I had waited my whole life to see. That part was a few minutes earlier.

Thor is battling Thanos. Thor reaches out for Mjolnir, his trusted hammer. Mjolnir begins to stir and rise. Mjolnir sails across the screen . . . over Thor’s head . . . and lands IN CAPTAIN AMERICA’S HAND! I’ll repeat that: CAPTAIN AMERICA WIELDS THE HAMMER OF THOR! I don’t know what happens next because I lost my god damn mind. I did hear Thor shout: “I knew it!” I thought to myself: “I knew it, too!” And then I was just a melted puddle of nerdy goo, fourteen years old again, and I pretty much stayed that way until the end of the movie.

Captain America has wielded the hammer many times in the comic throughout the years. The very notion that it was a possibility was teased in The Avengers: Age of Ultron. In that movie, the entire team are getting their drink on at a party. Thor’s hammer, or, rather, the attempt to lift it, becomes a party game of sorts. Captain America moves it, but only slightly. He doesn’t lift it. Just sort of nudges it back and forth. Thor reacts to this. Captain America lets go. It’s never mentioned again until Endgame. You know, in that scene where CAPTAIN AMERICA WIELDS THE HAMMER.

And he doesn’t just wield the hammer, either. He goes into battle with it. He twirls it like we’ve seen Thor do. He bangs it against his vibranium shield and creates lightning. He proves that he is worthy. He is the center of the single greatest moment in any movie that I have ever seen. A moment that, as we have already established, I have waited my entire life to see.

So . . . sorry. One of the five moments on the list I already made has to go.

I maybe ought to take a moment here to apologize to Karen. She never knew that I did it, but I really did assume that Steve Rogers was about to become a great super soldier in the sky because of her five-minutes-into-the-movie text. I have since discovered that what really happened in this situation is that Karen knows my own love for Captain America and had seen the movie the night before. She knew what moment was going to stick with me. She knew– had foretold the night before, in fact– that I was going to come completely and irrevocably fanboy unhinged. She was probably, truth told, grateful that I was seeing the movie on the second day so that she wouldn’t have to keep it secret for very long.

Captain America does not die in Endgame. He’s never been more alive. 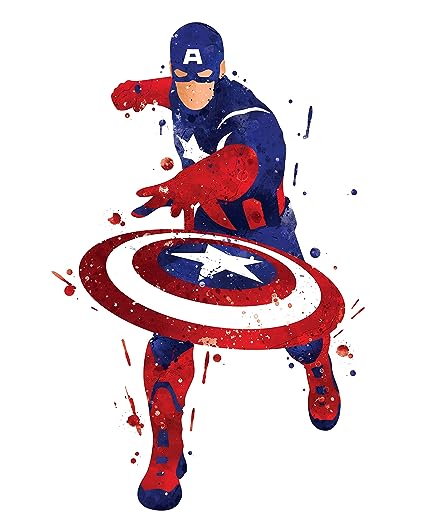