Sometimes it’s really easy to pick our theme for a given month. October? Halloween. December? Christmas. So Valentine’s Day for February, right?

Aren’t the Oscars in February?

But so is Groundhog Day, and as soon as Karen suggested this as our movie of the month, all three of us got a little excited. We’re all in agreement: this dark 1993 comedy is justifiably regarded as one of the greatest comedies of all time.

Plus, it has romance in it. And Stephen Tobolowsky is in it. He once played a doctor on The West Wing, a television show about The President. Bill Murray was nominated for an Academy Award in 2004.

We’re covering all the bases with this one.

Three Nerds’ selection, February 2019: Groundhog Day
Who Directed It: Harold Ramis
Who Wrote It: Danny Rubin and Harold Ramis
Who’s In It: Bill Murray, Andie MacDowell, Chris Elliott, and Stephen Tobolowsky
What does everyone else say about it: Rotten Tomatoes score: 96% (critics), 88% (audience), IMDB user rating: 8.0 (out of 10)
Where you can see it: DVD/Blu-Ray and four streaming services (Fandango Now, Google Play, Vudu, and Prime Video).

The Nerds Weigh In
Aaron: I have always really loved Bill Murray. From watching reruns of Saturday Night Live on Nick at Nite as a child to repeated viewings of Ghostbusters to how effectively he has reinvented himself as a dramatic actor over the years (SEE: Lost in Translation, or Broken Flowers). There has always just been something about him that has appealed to me. He’s very funny without ever really being over the top. He’s droll. And sarcastic. And he got robbed of that Oscar in 2004. (I did, too, because I had placed my money on him in an Oscar pool).

Greg: The first time I saw Groundhog Day, I have to admit, it wasn’t my favorite. I’d seen Bill Murray try and use dynamite to kill a gopher, I’d seen him catch ghosts with his then buddy Harold Ramis. . . twice. . . and I’d seen him cope, with hilarity and sincerity, with three ghosts of Christmas, each of which were tasked with making him a better person. Groundhog Day seemed a bit of a departure for Bill Murray for me. Which is a strange thing for me to say about a Bill Murray movie because, when you think about it, every Bill Murray movie is basically a major departure (for him) from the last! But I guess the issue I had, upon that first viewing of Groundhog Day, was that I was not quite catching the philosophy behind the film. Another odd thing to say, because the movie drips with philosophy. . . but I just didn’t see it. I wasn’t looking far enough past the Bill Murray repartee to which we had all become accustomed. The various elements of the flick just didn’t add up, I’m sorry.

BUT. . . then HBO picked it up, and then VHS became an available medium for this head-scratcher, and I saw it again. . . and again . . . and again. Happily for me, I learned and understood the lessons of the movie a bit more quickly than did Phil. I once read somewhere that Phil’s spiritual journey of re-living the same day over and over lasted more than two decades for him. For me, it really only lasted the “window” as we call it between the theatrical and the home video experience of this modern day classic.

Karen: I’m with Greg on this one. The first time I saw Groundhog Day, I didn’t particularly love it. I seem to remember finding it grating. And also charming. And maybe a little uncomfortable.

But you get something different out of a film at different times in your life with different perspectives to lean on. As a somewhat adult-ish person, I get it now. Groundhog Day is a dark comedy, and the thing about dark comedies is that you don’t really understand the humor unless you have some experience with the subject. When Groundhog Day came out in 1993, I was still really jazzed by dark comedies like Heathers and Don’t Tell Mom The Babysitter’s Dead. I dug them because 1. they were good, and 2. I could relate, having been an angsty teenager. With Groundhog Day, I couldn’t yet appreciate the finely tuned spectacle of this Harold Ramis keeper, Bill Murray navigating the often painful second adolescence that comes from trying to be the best version of you as an adult. Now, I feel mirth. Over and over and over again.

Lil Bit O Trivia – Groundhog Day
1. Apparently, while filming this classic comedy, Bill Murray and Harold Ramis disagreed about what sort of film they were making. A lot. Screenwriter Danny Rubin reported in 2004 that Murray wanted Groundhog Day to be more philosophical than it was, while Harold Ramis firmly wanted the film to be a comedy. Earlier than that, though, while promoting the movie in 1993, Murray reflected that it was actually the other way around: Murray wanted a comedy, while Ramis wanted the film to focus more on the romance between Murray and MacDowell. Couple the differing visions with Ramis’ claim that Bill Murray was going through a divorce at the time and often “really irrationally mean and unavailable”, making this film destroyed a long-standing friendship. Bill Murray stopped speaking to Harold Ramis entirely for twenty years, only to finally bury the hatchet on Ramis’ death bed in 2014.

2. The large Groundhog Day Celebration that is the main centerpiece of this film is an actual annual event, held in Punxsutawney, Pennsylvania every February 2 since (roughly) 1887. The site of the festivities is a wooded area outside of town called, just as in the movie, Gobbler’s Knob (though the film depicts this site as being in the bustling town square). This annual celebration draws nearly 10,000 people every year. Harold Ramis, Bill Murray, and Stephen Tobolowsky (the actor who plays Ned) have all served as Groundhog Day Grand Marshals for the celebration. 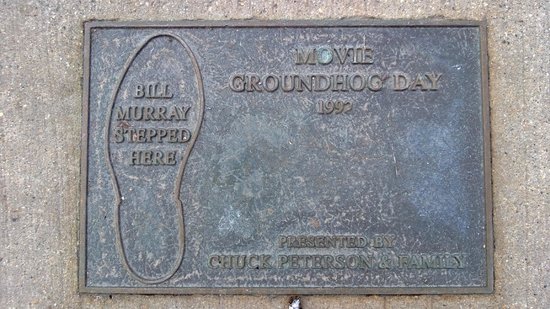 3. The town of Punxsutawney, Pennsylvania did not have a town center that looked good on camera, according to Harold Ramis, so they opted instead to film the movie in Woodstock, Illinois. The small town had been used for location shots in the 1987 film Planes, Trains, and Automobiles, which brought the town to the attention of Bob Hudgins, the location manager for Harold Ramis’ previous films. In the town of Woodstock, there is currently a plaque that commemorates the curb where Bill Murray’s character repeatedly steps in the puddle as well as many other tourist attractions for fans of the movie.

4. In 2003, this movie was the opening night film in the Museum of Modern Art’s “The Hidden God: Film and Faith” series. Other films in the series included Luis Bunuel’s Nazarin (1959), Federico Fellini’s 8 1/2 (1963), Ingmar Bergman’s Winter Light (1963), and Andrei Tarkovsky’s Andrei Rublev (1966). A December 7, 2003 article in The New York Times (entitled “Groundhog Almighty”) discusses in-depth both the incongruity of Groundhog Day being included among such “serious” films and the opinions of different religious clergy and adherents (including rabbis, Jesuit priests, Buddhists, and Wiccans) about how this movie is applicable to (or, in some cases, actually about) their respective religions.

We think that will do it for this week, friends. Make sure to check back next week for more new content!