We’re certain that our selection for December’s Movie of the Month is sure to be a controversial one that sparks conversation. Not because the movie isn’t worthy of such a distinction, but because there’s probably more than a few among you that will disagree that the movie fits our theme.

Last month, we focused on underrated films and then put a spotlight on one of the most well-loved movies of all time. This month, we wanted to focus on our favorite Christmas movie (for obvious reasons) and selected a movie that just barely squeezes itself in. Have we lost our collective minds?

Don’t be a naysayer! Die Hard is a Christmas movie! It takes place on Christmas, right? It makes you feel all warm and fuzzy watching John McClane beat the crap out of terrorists, right? ‘Tis the season!

Three Nerds’ selection, December 2018: Die Hard
Who Directed It: John McTiernan
Who Wrote It: Jeb Stuart and Steven E. de Souza
Who’s In It: Bruce Willis, Alan Rickman, Bonnie Bedelia, Reginald VelJohnson, and Paul Gleason
What does everyone else say about it: Rotten Tomatoes score: 93% (critics), 94% (audience), IMDB user rating: 8.2 (out of 10)
Where you can see it: DVD/Blu-Ray and four streaming services (Fandango Now, Google Play, Vudu, and Prime Video).

The Nerds Weigh In
Karen: Duh. Obviously a Christmas movie. Christmas party. Christmas decorations. Christmas jokes. Christmas happy ending. Christmas movie. And as far as the movie guts go, there is something obviously special about the little tango between Alan Rickman and Bruce Willis in Die Hard. Movie perfection. After all of these years, the one-liners still make me chuckle.

Aaron: A year or so ago, I was challenged by Greg to do a Facebook list of my personal favorite top 20 films of all time. I had a really difficult time not including this movie on the list. If my list had been more genre-specific (Say, Top 20 ACTION Films of All Time), then Die Hard would have been– without question– the number one movie on that list. I’ve loved this movie ever since I first saw it as a kid, and I’ve loved it for different reasons throughout the years. As a child, it was a solid action film (and rated R!). As a teenager, I appreciated that it was a solid action film that wasn’t brainless. In college, I began to appreciate it as a solid beginning for an actor whose films I have greatly loved (I love Bruce Willis and I won’t apologize for it). As a student of theatre, I recognized just how nuanced Alan Rickman’s performance was. As an adult, I get nostalgic because they just don’t make them like this anymore. I am not exaggerating to say that, with the possible exception of The Empire Strikes Back, it is entirely possible that I have re-watched this particular movie more than any other. In fact, I may be overdue to watch it again. 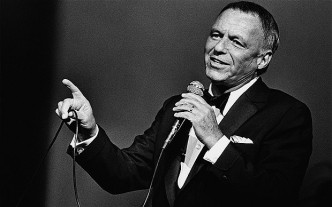 1. The first Die Hard movie is based on a 1979 novel by Roderick Thorpe, entitled Nothing Lasts Forever. This novel is a sequel to his 1966 novel, The Detective, which was adapted into a film in 1968. The film version of The Detective stars none other than Frank Sinatra. Due to a stipulation in Sinatra’s contract, the producers of Die Hard were legally bound to offer the role of John McClane to Frank before auditioning other actors. Mr. Sinatra would have been 73 years old at the time and turned the role down.

2. What do Don Johnson, Richard Gere, Arnold Schwarzenegger, Harrison Ford, Sylvester Stallone, Richard Dean Anderson, Burt Reynolds, and Nick Nolte have in common? All of them are rumored to have been offered the role of John McClane. Also rumored to have been in contention: Robert DeNiro, John Travolta, Charles Bronson, and Mel Gibson. Also: Michael Madsen, Al Pacino, and Tom Berenger. Bruce Willis had auditioned very early on, but was, reportedly, not taken very seriously by producers as he was considered, at the time, a comedic actor. The original posters for the film, in fact, focus on Nakatomi Plaza and barely feature Bruce Willis at all. 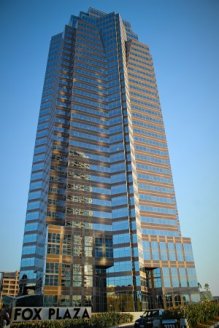 3. Speaking of Nakatomi Plaza . . . the building used for this location is actually Fox Plaza, the corporate headquarters for the movie company that made the film. At the time, the building was still under construction, so there wasn’t much modification needed to get the space ready. It was cheaper as well; Fox did not have to rent a building location because they already owned the one they were using. (Bonus fact: Fox Plaza is also featured at the end of Fight Club. It’s one of the buildings that explode at the film’s conclusion!)

4. There’s a great bit of improvisation in Alan Rickman’s death scene . . . that no one ever told Alan Rickman about. In order to make it appear that he was falling from a building, Rickman was supposed to drop twenty feet onto an air mattress while holding onto a stunt man. It was agreed to a three count before Rickman would be dropped, but the stunt man intentionally let go on the count of two. Poor Alan’s expression as he falls is an expression of genuine terror. Incidentally, Die Hard is Alan Rickman’s film debut.

5. There’s been a long-standing Internet rumor that Die Hard was originally intended as a sequel to the 1985 Arnold Schwarzenegger flick Commando. According to Stephen de Souza, who wrote both Die Hard and Commando, this rumor is demonstrably untrue. However, it has been confirmed that the novel 58 Minutes by Walter Wager was intended to be the story for Commando 2. This novel served as the source material for the final script of . . . wait for it . . . Die Hard 2: Die Harder. Also, since we’re talking about it . . . the script for Die Hard With A Vengeance was adapted from a Jonathan Hensleigh short story (“Simon Says”) which had been already earmarked to potentially become a Lethal Weapon sequel.

Happy Holidays from all three of us here at Three Nerds and a Movie!