I have a friend who has a completely illogical disdain for Bill Pullman. He can’t stand him, thinks he’s the worst actor ever, and refuses to watch things if he discovers that Bill Pullman plays a role, no matter how small. “He’s almost a non-entity,” he once said. “They might as well have filmed a cardboard cut-out for all the emotion present in his performance.”

And it’s not that I’m a big fan of Bill Pullman either. I don’t run out to see his movies. I don’t have a “Top 10 Performances of Bill Pullman” list tucked away in a notebook somewhere.  But I don’t hate the guy. If I consider him a “non-entity”, it’s because I barely ever even think about him. He’s never struck me as bad in a film. But I tend to not even remember he was in certain movies until I am reminded in conversations with friends. I guess the best way to put it is thusly: I am decidedly lukewarm about Bill Pullman.

Or was. Until I saw Zero Effect. 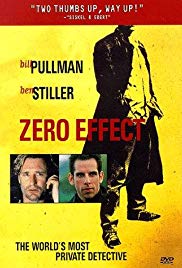 Anyone who doesn’t appreciate Bill Pullman should sit and watch this movie. Because his performance is awe-inspiring. It’s the sort of performance that bigger names (like Jack Nicholson or Al Pacino) would have won Academy Awards for, and if Zero Effect had been a bigger film, as opposed to a small, independent film, then Pullman just might have an Academy Award nomination on his own resume. He’s that good in this movie.

Zero Effect was released in 1998. It is written and directed by Jake Kasdan (whose father Lawrence is well-known for writing The Empire Strikes Back, Raiders of the Lost Ark, and Return of the Jedi, among other timeless nostalgia films). It’s a very promising debut.

But it’s also difficult to write about it without ruining many of the film’s surprises. I’ll try my best…

Ryan O’Neal stars as a shady tycoon named Gregory Stark. Stark has lost a set of keys. This set of keys contains the entry card for a safe deposit box that holds incriminating evidence against him. Soon, he begins being blackmailed by a clever con artist who leads him on elaborate goose chases. Seriously, he’ll receive notes that say things like (I’m paraphrasing) “Get on the #9 bus at such and such corner at 1:21 pm, take the bus seven blocks, get off the bus and get into a cab, go six blocks east and nine blocks west and three blocks south, go into the building right in front of you and ask to use the restroom.” In the restroom, he’ll find a note (again, paraphrasing) that says “Stay tuned Wednesday for the next list of commands.” Stark is frustrated and exhausted, so he hires private detective Daryl Zero.

Daryl Zero (played by Bill Pullman) bills himself as “the world’s most private detective” because people who hire him never get to meet him. Zero is agoraphobic, living every moment of his life disheveled in pajamas behind six deadbolt locks. He subsists almost entirely on canned tuna and room-temperature cans of Tab. Sometimes, he jumps on the bed while he composes awful folk songs. Potential clients must first be screened by his associate Steve Arlo (played by a very subdued Ben Stiller). Arlo takes whatever information he can get from clients back to his boss. Usually, most cases are solved without Zero ever having to leave the apartment. But this time is different: to follow the list of commands back to their source, Zero is going to have to shave, brush his hair, and effectively disguise himself to go out into the world and face polite society for the first time in years.

This is where Pullman’s performance really begins to shine. He’s quirky and amusing up to this point. But driven to solve this case (especially when the keys are found in a most-likely place, proving beyond a shadow of a doubt that his client is, most assuredly, not on the level), he must pose as an accountant. He becomes suave, sophisticated, charming– the polar opposite of what we have seen up to this point.

I can’t tell you more than that. Suffice it to say that this is one of those winding films that keeps turning back on itself so many times that you’re continually forced to rethink everything you think you already know. You’re forced to question how fallible your own objectivity and observation might be (or, “the two obs”, as Zero credits them in one of many expansive monologues about his process throughout the script). If you saw the ending coming, you cheated.

It is estimated that it cost $5,000,000 to film Zero Effect. The gross box office for its month-long theatrical run was a pittance in comparison: merely $1, 980, 338. How does a movie this clever, innovative, and downright entertaining fly so criminally under the radar? Is it about marketing it correctly? Had you heard of this film before I recommended it?

One thing is certain: Bill Pullman getting the Oscar nomination he so richly deserved for a riveting performance this many miles from his normal “type” would have helped. Zero Effect is available on DVD and can be streamed on Fandango Now, Vudu, and Amazon Prime. Check it out. I quote Ben Stiller when I say you’ll be “fucking flabbergasted.”