The process for selecting our Movie of the Month is an organic one, decided through somewhat intense (but always joyful) Messenger conversations between all three of us. We usually have a general theme in mind and then we proceed to pare our choices down within that theme to one that we all agree is worthy of the spotlight.

This month, the process worked a little differently because we had an idea that we couldn’t necessarily come up with a movie to represent. During a chat about underrated films of all shapes and sizes, we decided that we wanted to write about a movie that we each think is underrated and deserves a larger audience. This is a pretty straightforward process for our solo entries, but where do we start for the jumping-off point for our Movie of the Month?

How do you pick one “underrated” movie to represent all underrated movies? Just how do you define “underrated” anyway? Is it only movies that we think are really great, but never find a good-sized audience? Can we include movies that got universally-panned by critics but seem to be adored by the filmgoing-public? How exactly do you measure this sort of thing?

We consulted many, many, (many) lists on the Internet of what various critics and film lovers believe to be the most underrated movies of all time. A lot of good options emerged, but the very nature of what “underrated” seems to mean led to us having difficulty finding a movie that a) all three of us had seen or b) would be of general appeal to our readership.

And so, for the month of November, we are going to forego our normal “cinematic rabbit hole” concept and, instead, write about movies that fit a general theme. We’re going to highlight a movie that probably, by most definitions, is not really underrated. But hear us out…

We know what you’re thinking: The Shawshank Redemption is about as far away as you can get from underrated. There probably isn’t a single person alive who doesn’t love this movie or at least enjoy some aspect of it. It is, in fact, listed on IMDB.com as the #1 Greatest Film Of All Time based on user reviews. So how is it underrated?

One of the things we learned about this film while doing some research is that The Shawshank Redemption is very lucky to be as popular as it is now. It was an absolute box office failure– the $18,000,000 it grossed in theaters sounds like a lot of money, but that amount didn’t even cover the cost of production. Some critics were lukewarm about it, citing the film as overly sentimental and too long. It wasn’t until the release of the film on home video that anybody seemed to care. Seven Oscar nominations later and a little help from Ted Turner, who loved the movie and sold the syndication rights to cable for much lower than normal, and one of the biggest “flops” of 1994 became one of the most well-loved films of all time.

Three Nerds’ selection, November 2018: The Shawshank Redemption
Who Directed It: Frank Darabont
Who Wrote It: Frank Darabont
Who’s In It: Tim Robbins, Morgan Freeman, Bob Gunton, William Sadler, Clancy Brown, Gil Bellows, and James Whitmore
What does everyone else say about it: Rotten Tomatoes score: 91% (critics), 98% (audience), IMDB user rating: 9.3 (out of 10)
Where you can see it: DVD/Blu-Ray and three streaming services (Fandango Now, Vudu, and Prime Video).

The Nerds Weigh In
Karen: Shawshank is ultimately a film about friendship. This is not to say that it is ONLY a film about friendship. But primarily, it’s a film about how, even in during the darkest moments of your life, a close friend can be your soul mate and your salvation. There isn’t a human on earth who doesn’t need to be reminded of that fact from time to time, and I think this is partially why there is so much appeal in a film like The Shawshank Redemption.

Aaron: I love this movie more than I can adequately describe in a few sentences, so, instead, I will share a memory of seeing this movie for the first time. Back in 1994, my girlfriend at the time, myself, and a friend were invited to participate in an advance screening of this film a full two weeks before it opened. It was a free screening and we had to fill out little cards afterwards saying what we liked and did not like about the movie. I was pretty excited about this movie (big fan of Stephen King and Tim Robbins), but my two companions had no knowledge whatsoever about this movie (though it would turn out that my girlfriend had seen the trailer). This movie hit my friend hard; it affected him personally and viscerally in a very meaningful way. Right about the point where the movie wants you to think that Andy has killed himself, my friend decided that he needed to use the restroom as he didn’t want my girlfriend “to see him cry.” My girlfriend leaned across me and whispered to him, “He isn’t dead. They haven’t shown the part in the preview where he’s standing shirtless in the rain.” My friend actually gasped that she would have had the gall to ruin the movie for him. He didn’t speak to her for the rest of the night.

Greg: GCMS gave us seniors a few days to visit the colleges of our choice. One day, I went with a few folks to not see a college, but to see a movie. Those with whom I attended this feature were the ones who actually had to convince me to abandon our college-visit day to see this prison movie. And I’m glad my arm was so easily twisted.

1. Clint Eastwood, Harrison Ford, Paul Newman, and Robert Redford were all considered for the part of Red. Jeff Bridges, Tom Hanks, Kevin Costner, Tom Cruise, Nicolas Cage, Johnny Depp, and Charlie Sheen were all considered for the part of Andy Dufresne. Charlie Sheen was, reportedly, so enamored of the script that he offered to do it for scale. Harrison Ford and Tom Cruise were, in fact, the immediate first choices of director Rob Reiner, who offered Frank Darabont $2.5 million for the rights to the screenplay, so that he could direct the film himself.

2. When Andy goes to the library to begin work as Brooks’ assistant, we meet Jake, Brooks’ pet crow. Tim Robbins had to time his line (“Hey, Jake. Where’s Brooks?”) around the crows’ squawking patterns so that he wouldn’t be squawked over as he spoke. This is a crow, after all. Not really trainable to squawk on cue. Robbins actually studied the bird’s squawking pattern for a time to figure out how to time the line. This improvisation is noticeable in the finished film. You can see Robbins watching the crow as he approaches it, waiting for the moment it would squawk.

3. Speaking of Jake the crow. . .there’s a moment in the film that almost got Frank Darabont and crew slapped with a hefty fine from the American Humane Society. They  were required to monitor all sequences that involved Jake. During the scene where Brooks feeds Jake a maggot, the AHS objected. Their grounds? It was cruel to the maggot. Darabont was required to use a maggot that had died from natural causes. One was found. 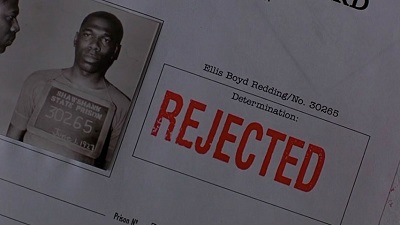 4. The mugshots of a young-looking Morgan Freeman that are attached to his parole papers are actually pictures of Morgan’s younger son, Alfonso. Alfonso also has a cameo in the movie as a con (he’s the one who shouts, “Fresh fish! Fresh fish today! We’re reeling ’em in!” as Andy is being escorted in). A year after The Shawshank Redemption, he appeared as a Fingerprint Technician in Se7en, another movie that stars his father.

5. Although set in Maine, the success of the movie helped boost the fortunes of Mansfield, Ashland, and Upper Sandusky, Ohio, three towns that share thirteen sites used as filming locations. According to the Mansfield/Richland County Convention and Visitors Bureau, the movie brought in more than 18,000 visitors, and produced an estimated three-million dollar boost to the local economy in 2013. There’s now a Shawshank Trail for tourists and local businesses have jumped on the bandwagon. A visitor can purchase themselves some Reformatory “Red” Wines, Shawshank Bundt Cakes, and the local Two Cousins’ Pizza sells Redemption Pie. The rock wall where Red’s “treasure” is buried, was built specifically for the film and stood for many years. Eventually, the wall was sold on eBay, one rock at a time, by the farmer who owned the land on which it stood. 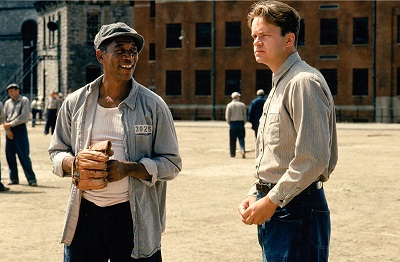 That’s all for this week, friends. Check in next week with Aaron. He’s got an underrated movie to recommend.