I can’t escape the month of October and our Halloween-themed movie essays without saying something about The Blair Witch Project. I just can’t. The film is too important to horror, and to me, to avoid mentioning it in some way. 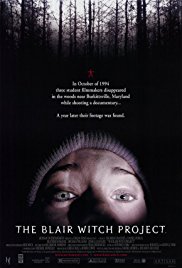 Gotta be honest, the film’s shaky handheld camera, the incessant use of the F-bomb, annoying Heather, the sense of “nothing’s happening” that many had while watching this movie for the first time, all made a lot of viewers unreceptive to the pop culture phenomenon. I get it, and I will even concede that the film isn’t for everyone.

What I can’t get around, and what the naysayers would also be unable to deny, is how this horror movie single-handedly revolutionized the always-dying-in-some-way horror genre.

You see, every few years, the horror genre goes through a long period of unoriginal duds, each and every one spawned by some sort of re-invention of the genre brought on by a handful of gems. What I mean is, the horror genre is all about scaring you – Greg’s “duh” moment of the day. But there are only so many ways to accomplish this, and once you’ve been subjected to them a few times, you aren’t scared anymore. . .you’re numb to it. Horror writers and directors are faced with the dilemma of finding new and interesting ways to scare you. I’d suggest a theory that horror is harder to pull of than comedy, but this is another debate.

It was at least a full year before The Blair Witch Project hit theaters that I first heard of the legend. In fact, the legend is all I was aware of; The Blair Witch Project movie was not a thing or a glimmer in the eyes of an unsuspecting public. There were just some blurbs on the SyFy Channel and The Discovery Channel about the mystery of these three people who got lost in the woods somewhere in Maryland, USA. The internet was still in its infancy, but there were soon rumors about haunted woods and missing persons and student projects gone awry. In a world before anyone ever (misleadingly) used the term “fake news,” my friends and I became obsessed with this mystery and these rumors. There were even missing persons reports and “missing” posters circulating. It was unbelievable.

Never, for nearly a year of these intermittent blurbs in news and on the internet, was there even a discussion about a movie.

Until the internet blew up again with rumors that, although the students had not been found, their camera and all of their footage had been. Authorities were piecing it together, trying to unlock the mysteries of what went on out there in the woods a few years before 1999.

Our thirst for knowledge knew no bounds, and we scoured the edges of the internet and back to figure out what the deal was. It was fascinating to our inquiring minds, and spooky to our macabre tastes.

Then it all came to a head in 1999 with the announcement that they had pieced together the found footage and were going to release it for a limited time in theaters.

I saw it opening night, and my love for horror movies grew three sizes that day (that’s a Grinch reference, in case you were wondering). I’d seen hundreds of slasher movies, ghost stories, demon movies, monster mashes. . .The Blair Witch Project was NONE of that. It was something all its own. Something that had never, and I mean never, been done before.

I truly did not know if this was real or fake until the very, very end, and even then I was still skeptical. I swear I saw Heather in a Steak ‘n’ Shake commercial (a chain of nostalgic burger joints peppering the sides of freeways all through Illinois and western Indiana). I swear it was her. . .”but she’s still missing,” I recall thinking. “Just looks like her,” I thought.

It literally wasn’t until the MTV Movie Awards that year when Mike, Josh, and Heather herself all walked onto the stage, months after the movie debuted in theaters, that I knew I had been duped. And I loved it.

The Blair Witch Project was, for me, the Andy Kaufman of horror films. The filmmakers were the ringleaders of this big joke, and we were the butts of it. I have never felt so happy to feel so stupid.

But then there came an onslaught of found-footage horror movies. For better or for worse, love them or hate them, there were tons. Still are! But none of them match the originality of The Blair Witch Project, and until the next James Wan comes along and reinvents THIS genre, I’m sure they never will.

By the way, in terms of popularity, The Blair Witch Project is one of the most profitable movies of all time. Made for a scant $60,000, it made well over $250 million worldwide. The jitterbug camera may have made some puke, but it made some others very rich, indeed, and it captured the imaginations of a whole new generation of horror fans for years to come.