This is great advice.

Great advice from a great movie.

We’re sure you’ve heard by now that Keanu Reeves and Alex Winter are reuniting for a third movie in this series. Twenty-seven years after they first played the roles. Little is known at this time, but we know this: the movie is called Bill & Ted Face The Music. According to an interview in Entertainment Weekly, the film is directed by Dean Parisot (of Galaxy Quest fame) and written by Chris Matheson and Ed Solomon (the two gentlemen who wrote the first two films). Plot details are scarce, but it has been revealed that Bill and Ted are now middle-aged and are helped this time around by their teenage daughters.

Are you excited? We sure are.

In this week’s bonus content, Aaron answers a question from Karen. Karen will also answer two questions (one from Greg and one from Aaron). Greg is taking the week off, but promises some fun this Friday with a solo entry inspired by our Movie of the Month!

We’ll start with Karen. She was asked the following question by Greg: So the basis of Q4 stems from my observation that you rarely have an unkind word to say about the movies you see. Is this because you choose, as do I, to focus on spreading positive vibes about movies and elect to steer clear in a public forum of the ones you dislike, or is it because you truly love everything on the big screen and have yet to find that flick that pisses you off? I joke a bit here, of course, but if this were question 3A, I’d wrap up by asking in what world your favorite type of movie character would exist, so that you’d see every single movie that type of character is in? Wow – I confused myself with this one. . . it sorta got away from me. I think I’m asking what genre, or what themes, are important to you on film that, when you hear about them, you want to go see a character you hope you will find his/her way around in that world?

Karen’s response: “You’re not the first person to say something like this to me (‘But you love everything, Karen!’). I really don’t. There are some movies I despise. But I don’t really see the point in ruining someone else’s potentially life-changing film experience. Or even someone’s ‘I really enjoyed that day at the theater because of that film’ experience. We all interpret art differently, and I absolutely consider film to be an art form. Also, I am almost always able to find something positive in a movie, no matter my opinion and/or the general consensus. I also have a pretty good sixth sense about what I’m going to like, with or without a trailer. And I’m rarely wrong about that. Maybe it’s the years of obsessively watching all types of films. Or maybe I just know my film self really well?

3A! Interesting. . . Science-fiction is my favorite genre, so I guess ‘that’ kind of world. In recent years, Emily Blunt as Rita in Edge of Tomorrow (I love this film – I think it’s highly underrated, both from a sci-fi and an action perspective), Scarlett Johansson as Lucy in Lucy, Amy Adams as Dr. Banks in Arrival, and Natalie Portman as Lena in Annihilation come to mind. And further back, Jodie Foster as Dr. Ellie Araway in Contact and Sigourney Weaver as Ripley in anything Aliens (even the ‘bad’ ones). Beleaguered, the last remaining hope for mankind (directly or indirectly), just getting the job done to the tune of aliens, outer space, or alien invasions. I will love it. Every single time.”

Aaron is also a big fan of science-fiction. But one of his truest passions is silent film. He was able to talk about that a bit in this question from Karen: At this year’s TCM Film Festival, Martin Scorsese discussed the importance of advocating for film as art. He suggests that in this age of “content” (Netflix, Hulu, Amazon, YouTube), cinema is being minimized by its inclusion on multi-media platforms alongside commercials, how-to videos, and easily digested bits of information. What are your thoughts on this? Is the unprecedented availability of film (literally) at our fingertips helping preserve film’s legacy or destroying it? How do we merge the old with the new in a way that helps us take the time to understand and advocate the art behind the film when it’s lumped in with everything else?

Aaron had to think very hard to come up with an adequate answer to this thought-provoking question. He states: “This is an interesting question. And I am of two minds about it.

My immediate instinct is that Mr. Scorsese is absolutely correct. And I say that because I have a Roku TV that has multiple free-movie channels associated with it. There have been movies I have wanted to see and I was able to find on one of the myriad channels. But I found myself consistently frustrated because it was taking me four hours to watch a ninety-minute movie because they were showing five minutes of commercials and advertisements for every ten minutes that the movie was running. So. . . yes, it’s great that I have (pretty much) any movie I want to see available as quickly as I can push the buttons on my remote. But I don’t utilize this service for movie watching because I can’t stand the constant interruption.

The other side of that, though, is that I am a huge fan of silent film. A good chunk of silent films, especially the more obscure examples that have not stayed fresh in the film-goer’s eye, are in the public domain. This means that they are (usually) available online. For free. I watch a LOT of silent movies on YouTube. Without a site such as YouTube, there are a large number of movies I would really like to see that I would not have ready access to. So, again. . . in this case, it’s great that I have (pretty much) any movie that I want to see (provided it falls into public domain territory) available as quickly as I can punch buttons on my keyboard.

What I would like to see. . . because it is a service that I would pay for . . . is just a general on-demand database of any movie ever made. I pay my monthly fee (like I would for specialized services, like Film Struck or Kindle Unlimited) and I then have access to any movie I’m interested in watching. Movies that are currently in theaters could, obviously, be excluded. But if it’s on DVD or streaming services? I wanna watch it for $20 a month! Advertisements before the movie (just like in theaters). Cross-referenced recommendations just like Netflix.

I’m dreaming. I know. This would never happen. For now, I’m happy with renting the occasional movie off Vudu (an invaluable service that I didn’t even know existed until I began communicating again with Greg).”

One more from Karen and we’ll let you go. Aaron asked: What attracts you first to a movie? Genre? Cast? Director? Has there ever been a movie that you were not attracted to initially that you, ultimately, really loved? 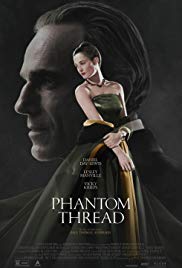 And I wouldn’t say that I wasn’t originally attracted to it, but I was cautiously optimistic about The Phantom Thread. I enjoy Paul Thomas Anderson’s work, but I don’t love There Will Be Blood. I thought that I would enjoy The Phantom Thread, but I wanted it to be nothing like There Will Be Blood. It wasn’t, and I adored it. It was gorgeous, deliciously weird, and that score is LIT.”

So, what’s the word, friends? Did you see The Phantom Thread? Isn’t it awesome that Karen got to be in the same room with Martin Scorsese? What is Aaron’s obsession with silent film? Don’t you kinda miss Greg?

Don’t fret! Greg will be back on Friday with all new solo content. Come check it out!