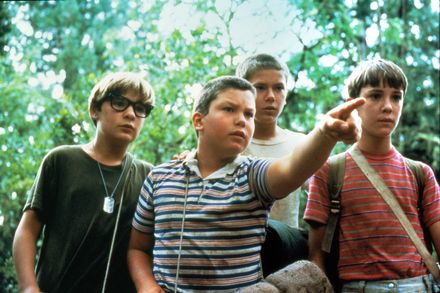 August 22 is a very important date for us in the history of movies we all agree are worth the nostalgia. In 1986, Rob Reiner’s fantastic coming-of age movie, Stand By Me, was released nationwide. It had actually opened in a limited release a few weeks prior, but that original release was only available in sixteen theaters across the nation. When it opened in 745 theaters on August 22, it was the second biggest box-office draw of that weekend. Before its run at the cinema was complete, it had pulled in an estimated $52,000,000 in ticket sales, a take that far exceeded the film’s small $8,000,000 budget.

What do you think, friends? Does Stand By Me stand the test of time? What is your take on this film? Let us know in the comments below!

For our bonus content this week, we present more snippets and excerpts from our Q and A. These three questions are all themed in that each of the people answering found them very frustrating!

Greg asked the following question to both Karen and Aaron: Give me the names of a coupe or three of your favorite filmmakers, be they actors or directors or writers, why you love them so much (briefly – don’t fall into MY trap of not knowing when to quit typing), and what sort of dream project you’d love to see them all work on together.

Both of them had considerable difficulty narrowing down the list.

The first three filmmakers that come to mind are:

1. Cameron Crowe. I think Cameron Crowe is beloved, but under-appreciated as a filmmaker. I think people overlook the honesty of what he’s creating by focusing on the emotion in his projects. But it’s the combination of both that makes his work special, in my opinion. He has the ability to tap into Feelings (with a capital F) while telling you a story about your sister, or your dad, or your best friend, or your crazy cousin who everyone loves, but no one really gets. His films are love stories about love stories and music and family. He understands incorporating music into his films as a supporting cast of its own (anyone seen Singles lately???) I think his body of work may well be my favorite, regardless of genre.

“I gave her my heart, and she gave me a pen.” Still one of the best movie lines ever written.

2. Spike Jonze. It’s because of Her. It’s not that I’m not a fan of some the rest of his work (except maybe Jackass, which isn’t my thing). It’s just that this particular screenplay smacked me right across the face when I saw the film in the theater. Hard. It’s not everyone’s cup of tea – I get it. But it spoke to me. If I had to choose a screenwriter that I love more, I would probably choose Preston Sturges or Aaron Sorkin. I pretty consistently love their work. The best of comedy in Sturges and witty dialogue in Sorkin.

3. Yorgos Lanthimos. I don’t think there is any filmmaker out there today who sees the absurdity of humanity as clearly as Lanthimos. And to translate that to the screen in the way he does is nothing short of masterful. After I watched The Lobster, I remember sitting up in the theater and thinking, (about dating and relationships) “Yep, pretty accurate.” Somehow this is conveyed perfectly through a story about people who must find a mate or turn into an animal. On paper, it sounds totally asinine. In the art of the film – absolute clarity in the absurdity.

It’s hard to think of the three of these men working together on any project. But when you consider Cameron Crowe’s Vanilla Sky take on Open Your Eyes, then maybe, just maybe, it starts to come together. Based on interview clips I’ve seen Cameron Crowe give on making this film, I get the impression he still may have something a little edgier to give to his work in the future. I picture a think-y, dark, existential science fiction arthouse film. Set in the future. Mildly post-apocalyptic, but more about the human condition than the backdrop of destruction.”

And then, Aaron’s answer:

“My favorite filmmakers are a really hard list to narrow down. Seriously, Greg, this took hours.

After much deliberation, though, I decided on:

– Jim Jarmusch. If I’m being honest, I think my own excursions into screenwriting have probably tried to emulate him too much. He does edgy, mildly-plotless, definitely-meandering, completely-relatable character studies (though there have been a couple genre films thrown in, such as Dead Man and Ghost Dog: The Way of the Samurai) on a super-low budget (and frequently, in black and white). I love his work because of how god damn ballsy it is. It takes guts to base your whole career on plotless, meandering movies.

– Clint Eastwood. Yes, his politics are eyebrow-raising. He’s said a few things that are a tad on the side of whackadoodle, but he has never made a movie (as a director, I mean– those two orangutan movies he starred in are enjoyable garbage) that I haven’t loved. He has transcended genre (westerns, mysteries, thrillers, musicals). He has tricked people into caring about social issues (Million Dollar Baby). He has pinpointed the defining moments of the zeitgeist (Midnight in the Garden of Good and Evil, Letters from Iwo Jima, American Sniper). I love his work. And I think it’s safe to say that, on a contemporary level, he is my favorite mainstream director.

– Charles Chaplin. I am a tremendous fan of the silent era, and I have a penchant for silent comedy in particular. Sir Charles Chaplin is not my favorite comedian of that era (that honor goes to Harold Lloyd), but he is, inarguably, the best filmmaker. It’s interesting that he is considered so far ahead of his time, when, in actuality, he was behind the times (most of his best films were made after the advent of “talkies”). But there’s innovation as well in refusing to conform, in being the only person still utilizing outdated formats and producing better work than anyone who previously used the format ever did. Charles Chaplin, with his crooked cane and clad in his suitcoat and bowler, may be the single-most-recognized figure in pop culture. There’s a reason for that: Charles Chaplin is the man.

Now that I’ve listed the directors: I would like to see Jim Jarmusch cast Johnny Depp as Charlie Chaplin in a silent, black and white film. An all-new script in the spirit and vein of Chaplin’s classics. Clint Eastwood can do the score, because he is also a damn fine jazz musician.”

Since Aaron and Karen had such a difficult time answering this question, it was only fair that Greg got a question difficult for him. This question, posed by Aaron, concerned remakes: Let’s pretend that you’re a famous filmmaker. Pick a movie that you would like to remake and explain what you might change to make it a better film.

Ok, I’ve moved on and come back.

All of my favorite movies are ones that I would choose not to remake. When I heard about the Poltergeist remake a couple years ago, for instance, I cringed, yet watched anyway in disbelief that such a travesty could occur. But there is one movie that, to me, is perfect save for one scene that, if slightly different, would make this the perfect comedy. If I had the chance to remake Caddyshack (just wait, please) I’d eliminate the gopher entirely. There. I said it. It just doesn’t fit. Yes, the movie is silly and zany and crazy and goofy. But it is as such using great physical comedy and amazing one liners. The gopher just doesn’t fit. Silly, zany, crazy, and goofy do not all have to equal stupid, and 99% of Caddyshack proves this point. “So what happens to Bill Murray’s character, much of which revolves around the extermination of the varmint?” you might ask. An excellent question that deserves brief examination. His interactions with EVERY CHARACTER IN THIS MOVIE are PERFECT. So, instead of showing him preparing for the gopher battle, I’d just throw more interaction in there. Another scene with Chevy where he actually shows up to the pool or pond. A scene with dynamite down a gopher hole (but no gopher). In fact, all of the gopher extermination scenes would work just fine without the presence of a puppet gopher, to me. Show the holes, have the Scottish guy yell at him about gopher holes, and show Bill (aka Carl) trying to rid the planet of an unseen gopher. Seems silly to pick on such a lauded comedy for such a tiny thing, but Aaron asked, so that’s my answer.”

That’ll do, we think, for today. What are your thoughts? What is your favorite movie by Cameron Crowe? Does Greg have a point about Caddyshack? Is it just as timeless without the gopher? Is Aaron possibly the biggest nerd for loving silent film?

Join us on Friday for Greg’s first solo entry!

2 thoughts on ““If I could only have one food to eat for the rest of my life? That’s easy. Pez. Cherry flavor Pez.””